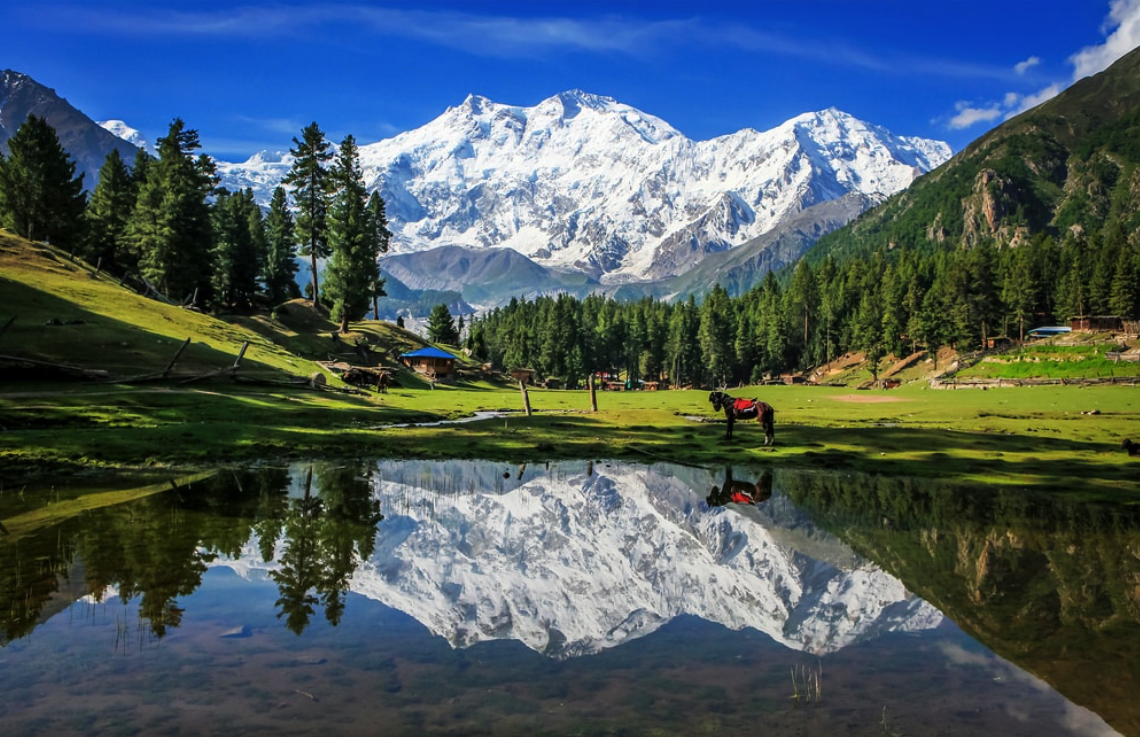 Afghanistan is an arid and mountainous country located in Asia. The country extends from Uzbekistan in the north to Pakistan in the south and runs along the Hindu Kush mountains. It has a population of 32 million people and covers an area of 652,000 square kilometers. But does it snow in Afghanistan?

Afghanistan, due to its expansive landmass, experiences different climates in different parts of the country. In the lowlands, especially around the basins of Sistan, Jalalabad and Turkestan mild temperatures of around 68 degrees Fahrenheit (20 degrees Celsius) are recorded. The mountainous areas have a continental climate in which winters are harsh and have subzero temperatures. Snow falls between October and March with the highlands experiencing the most snowfall.

When does it Snow in Afghanistan?

In Mazari Sharif, the average low temperature is 48.9 degrees Fahrenheit (9.4 degrees Celsius) and an accumulated precipitation of 0.15 inches (3.9 millimeters) is recorded. Snow is seen on the highest mountain peaks while the lowlands are yet to see snowfall.

Although it does not snow in Mazari Sharif, the area witnesses an increase in the precipitation levels with 0.53 inches (13.5 millimeters) being recorded.

It snows heavily during the month and Mazari Sharif experiences two days of snowfall.

It snows for 3 days in Mazari Sharif.

Where does it Snow in Afghanistan?

The snow recorded in Afghanistan predominantly falls in the northern and central regions of Afghanistan. The Hindu Kush mountain ranges experience the most snowfall.

Read on to find more about some of the snowiest places in Afghanistan:

Kabul is the capital and biggest city in Afghanistan. Located between the Hindu Kush ranges at an elevation of 5,873 feet (1790 meters) above sea level, it has a population of about 4 million people on an area of 1028 square kilometers.

The coldest month is January and records an average low temperature of 19.4 degrees Fahrenheit (-7 degrees Celsius).

Mazari Sharif is a city in Afghanistan famous for being the grave of Ali, Muhammad’s son-in-law. It is the lowest-lying city, with an altitude of 1171 feet (357 meters) above sea level and spans an area of 83 square kilometers.

Mazari Sharif experiences a semi-arid climate where winters are characterized by low precipitation and cold temperatures.  The coldest month is January with an average low temperature of 28.2 degrees Fahrenheit (-2.1 degrees Celsius).

It snows for about 10 days between November through March.

Kandahar is the second-largest city in Afghanistan with a population of about 600,000 people. It sits at an altitude of 3310 feet (1010 meters) above sea level and occupies an area of 273 square kilometers.

The city experiences a semi-arid climate that features insignificant amounts of precipitation and low temperatures during winter.

The coldest month is January with an average low temperature of 32 degrees Fahrenheit (0 degrees Celsius).

Herat is a historical town in Afghanistan where ancient trade routes between the middle east and parts of South Asia used to lie. The city has a population of about 600,000 people and occupies an area of 182 square kilometers.

The city a has semi-arid climate where winters are cold and experience low precipitation. The coldest month is January with an average low of 26.8 degrees Fahrenheit (-2.9 degrees Celsius).

It snows for about six snowfall days per year in Herat.

Afghanistan has a couple of rugged, snow-capped mountain ranges that are perfect for winter sports activities. However, political instability and wars that have rocked the nation over the years have been a stumbling block in the efforts to develop a thriving skiing scene.

There is hope still as the country continues to strive towards a stable and peaceful daily life, a couple of skiing resorts are coming to life with Bamyan skiing resort leading the pack.

This ski resort is located, about 160 kilometers from the capital Kabul, in the Hindu Kush mountains. Situated between elevations of 2765 meters and 2800 meters above sea level, the resort has 0.3 kilometers of slope available for skiing and snowboarding.

Bamyan is served by one ski lift that carries 200 passengers per hour and covers a total lift length of 200 meters.

Afghanistan also offers breathtaking scenes and lush historical memorabilia that spans over 2000 years. A tour of Kabul city opens a window to the profound representation of the country’s yesteryears, the present, and peaks a look into its future. Despite it being label as one of the most dangerous destinations in the world, its picturesque landmarks and rich history are hard to resist.

Does It Snow In Singapore?

Does It Snow In Japan?

Does It Snow In Iraq?

Does It Snow In Sri Lanka?

Does It Snow In Syria?

We use cookies on our website to give you the most relevant experience by remembering your preferences and repeat visits. By clicking “Accept”, you consent to the use of ALL the cookies.
Cookie settingsACCEPT
Manage consent

This website uses cookies to improve your experience while you navigate through the website. Out of these, the cookies that are categorized as necessary are stored on your browser as they are essential for the working of basic functionalities of the website. We also use third-party cookies that help us analyze and understand how you use this website. These cookies will be stored in your browser only with your consent. You also have the option to opt-out of these cookies. But opting out of some of these cookies may affect your browsing experience.
Necessary Always Enabled

Performance cookies are used to understand and analyze the key performance indexes of the website which helps in delivering a better user experience for the visitors.

Analytical cookies are used to understand how visitors interact with the website. These cookies help provide information on metrics the number of visitors, bounce rate, traffic source, etc.

Advertisement cookies are used to provide visitors with relevant ads and marketing campaigns. These cookies track visitors across websites and collect information to provide customized ads.

Other uncategorized cookies are those that are being analyzed and have not been classified into a category as yet.