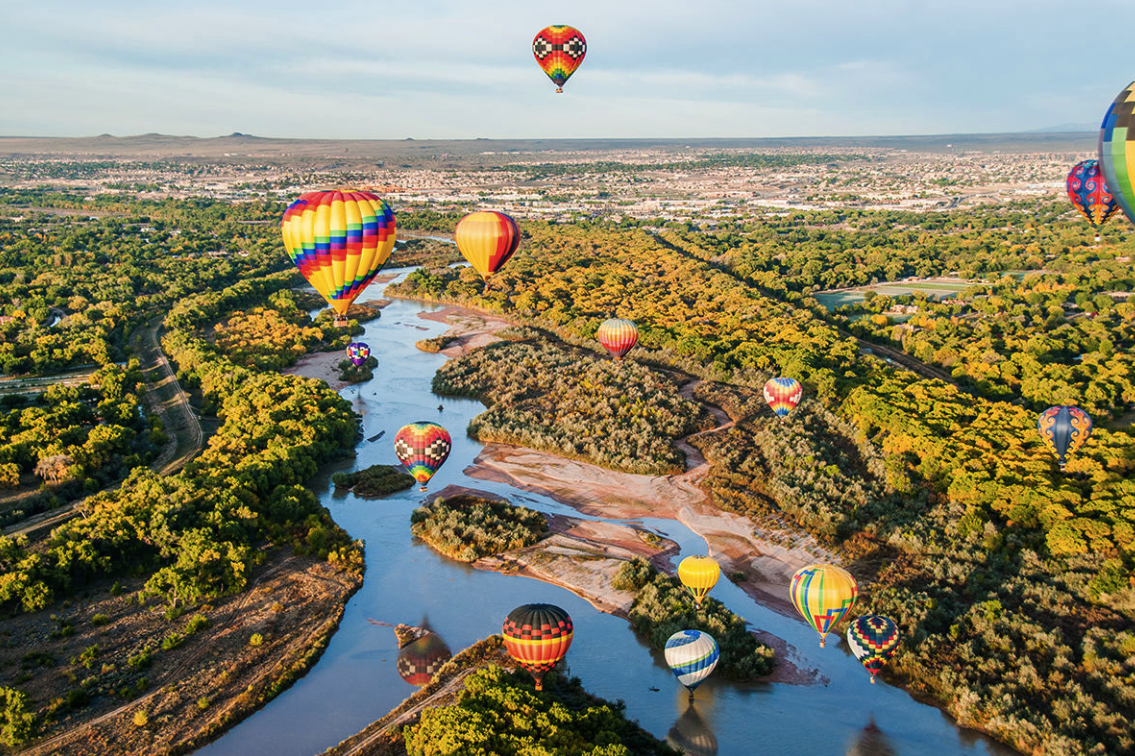 Does it Snow in Albuquerque?

Albuquerque, New Mexico, is one of the most culturally diverse cities in the United States. The city’s vibrant and numerous ways of life are easily seen in day-to-day life: from the Spanish-style building designs and food to the artistry. Albuquerque covers an area of 489.17 square kilometers and stretches from the Sandia Mountains in the north, traversing through suburban developments, the Rio Grande River, and the Albuquerque basin to the low, rugged lava bluffs in the south. It is also the most populous city in New Mexico, with a population of about 560,000 people. But does it snow in Albuquerque?

Albuquerque experiences an arid semi-continental climate characterized by cold winters and hot, precipitous summers. The average low temperatures drop below the freezing point in the winter period, which falls between December and February. Snow is a common occurrence in Albuquerque during winter, and the city sees an aggregate of 9.5 inches (241.3 millimeters) of snow throughout the season.

When does it Snow in Albuquerque?

Despite snow typically falling from December through February, some parts of the city may report the first whites of snow as early as October. Snowfall in Albuquerque increases with altitude, and the high-altitude eastern parts of the city (Sandia Heights) receive higher snowfall than other sides.

December marks the start of the winter period in Albuquerque. It is chilly, with the average temperatures fluctuating between highs of 43.9 degrees Fahrenheit (6.6 degrees Celsius) and lows of 27.5 degrees Fahrenheit (-2.5 degrees Celsius. December records the most snowfall in Albuquerque, witnessing 4.9 snowfall days and a snow accumulation of up to 2.44 inches (62 millimeters) of snow. On the other hand, rainfalls for 5.3 rainfall days and accumulates up to a depth of 0.63 inches (16 millimeters).

As winter is now in full swing, temperatures drop further and now range from highs of 43.9 degrees Fahrenheit (6.6 degrees Celsius) to freezing lows of 27.1 degrees Fahrenheit (-2.7 millimeters). Throughout the month, snowfalls in Albuquerque for 3.9 snowfall days and aggregates up to a depth of 2.24 inches (57 millimeters). On the other hand, rain is seen for 4.2 days and regularly accumulates up to 0.51 inches (13 millimeters) of precipitation.

As the winter season draws to a close, Albuquerque still experiences frosty conditions despite the average temperatures rising. The average temperatures in Albuquerque range from highs of 49.3 degrees Fahrenheit (9.6 degrees Celsius) and lows of 30.6 degrees Fahrenheit (-0.8 degrees Celsius). Snowfall is experienced for 3.8 days and accumulates up to an average depth of 1.46 inches (37 millimeters) throughout the month. The city sees rainfall for 3.9 days and often collects up to 0.39 inches (10 millimeters) of precipitation during the month.

Albuquerque, located in central New Mexico, has a vibrant skiing area frequented by winter sports enthusiasts from all over New Mexico. There are also ski resorts within a few hours’ drive from Albuquerque that are also famous among Albuquerque residents and tourists.

Sandia Peak Ski Area is a ski resort located in the Sandia Mountains just east of Albuquerque. It is home to some of the longest and largest trail networks for cross-country skiing in New Mexico. The ski resort has a base elevation of 8,678 feet (2,645 meters) and a top elevation of 10,378 feet (3,163 meters) above sea level and covers 200 acres of skiable terrain. It has 35 skiing and snowboarding runs that cater to all skiing difficulty levels.

Sandia Peak ski has a lift system comprising four double lifts, one aerial tramway, and a surface lift for transporting guests around the ski area. It has a snow sports school that organizes skiing and snowboarding lessons for winter sports enthusiasts and also hosts races and competitions from time to time.

Santa Fe Ski Resort is located in the Rocky Mountains, just a few hours’ drive from Albuquerque. It sits between elevations of 10,350 feet (3,155 meters) and 12,075 feet (3,680 meters) above sea level and has 660 acres of skiable terrain. The resort has 68 runs that cater to all levels of skiing and is equipped with seven lifts for transporting guests within the ski area.