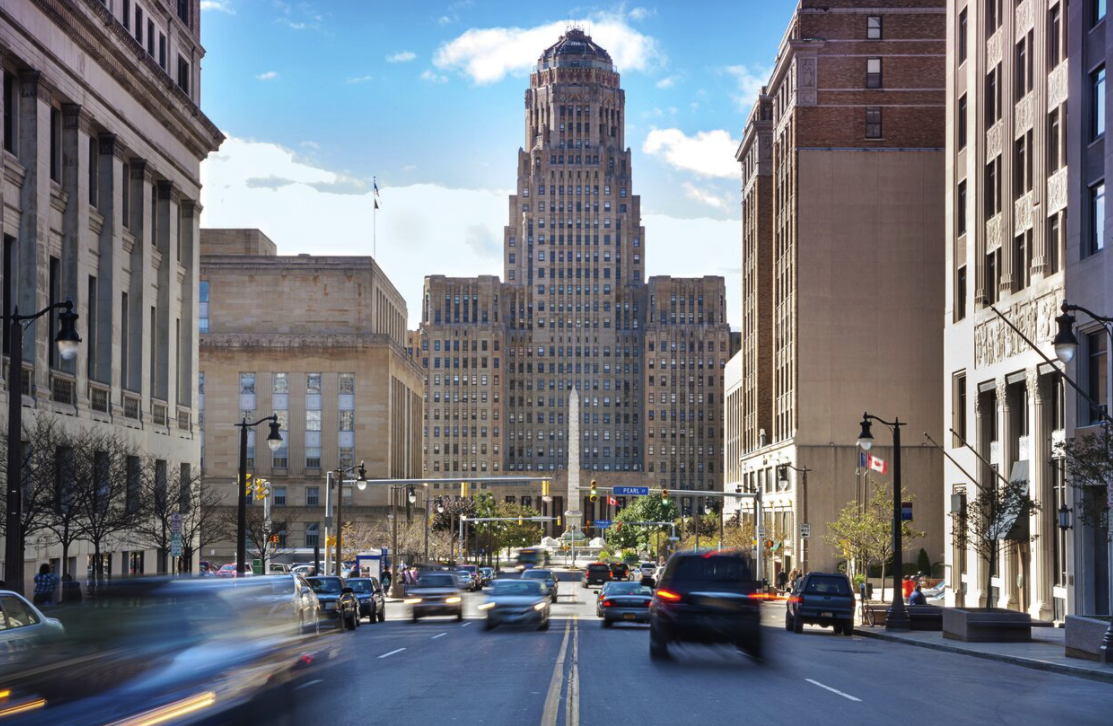 Does it snow in Buffalo?

Buffalo is the second-largest and second-most populous city in the U.S. state of New York. The city started as an inland port on the Erie Canal, serving the Great Lakes and the Atlantic Ocean. Buffalo currently has a population of 278,349 spread across its 135.92 square kilometre area, making it the 76th most populated city in the United States. But does it snow in Buffalo?

Buffalo experiences a humid continental climate like most regions surrounding the Great Lakes. Summers in Buffalo are characterized by warm temperatures and moderate humidity. On the other hand, winters in the region are cool and wet. And as the city is located in the Great Lakes region, it experiences the lake snow effect, resulting in substantial snowfall in the area. So it does snow in Buffalo, but the amount of snowfall is lower than in other parts of New York.

When does it snow in Buffalo?

Snow is a common feature in Buffalo for most months of the year. Buffalo usually records its first sighting of snow in October and the last one in May. It, however, records the bulk of its annual snowfall in winter, which starts in early December and lasts through to mid-March. Buffalo witnesses snowfall for 77.2 days throughout the year and records a snow accumulation of 30.94 inches (786 millimetres).

December marks the beginning of heightened winter in Buffalo. It is also a cold month in the city, with average temperatures hovering around the freezing mark. On average, the temperatures across the city range from highs of 35.6 degrees Fahrenheit (2 degrees Celsius) to lows of 27.7 degrees Fahrenheit (-2.4 degrees Celsius). Buffalo records a snow accumulation of 5.24 inches (133 millimetres) during the month after 15.5 snowfall days.

January is the coldest winter month in Buffalo, with the cold weather experienced in December intensifying its grip on the city. The average temperatures in the city tend to stay in the sub-zero range and vary from highs of 29.3 degrees Fahrenheit (-1.5 degrees Celsius) to lows of 19.4 degrees Fahrenheit (-7 degrees Celsius). Buffalo records a snow accumulation of 7.13 inches (181 millimetres) in January after 19 snowfall days.

February is another freezing month in Buffalo characterized by sub-zero temperatures. The weather is slightly warmer than in January but is still unbearable. During the month, the average temperatures across the city vary from highs of 31.3 degrees Fahrenheit (-0.4 degrees Celsius) to lows of 20.1 degrees Fahrenheit (-6.6 degrees Celsius).  February is the snowiest month in Buffalo, with the city recording a snow accumulation of 7.64 inches (194 millimetres) after 17.1 snowfall days.

March is the last month of the cold season in Buffalo. It is also a transitional month, as it is both the last month of winter and the first month of spring. Temperatures in the city are still freezing and range from highs of 40.6 degrees Fahrenheit (4.8 degrees Celsius) to lows of 27.9 degrees Fahrenheit (-2.3 degrees Celsius). The amount of snowfall in Buffalo decreases in March, and the city records a snow accumulation of 4.02 inches (102 millimetres) after 12.4 snowfall days.

Where does it snow in Buffalo?

As the lake effect snow is a localized phenomenon, the winter snowstorms are usually confined to one part of the city at a time. Generally, the hilly southern part of Buffalo receives more snowfall than the northern part. Some of the snowy locations in Buffalo include Aurora, East Aurora, Blasdell, Hamburg, Orchard Park, and Elma.

Buffalo has no natural or artificial ski slopes within its metropolitan area. However, residents and tourists in Buffalo can enjoy themselves in the several ski resorts in Western New York State, most of which are a few-hours-drive from the city.

Holiday Valley is located in Ellicottville, 53 miles south of Buffalo. The resort is one of the largest in Western New York State and has 290 acres of skiable terrain and four fully-equipped terrain parks.  It also has a vertical drop of 750 feet and 60 ski trails served by 13 lifts having a total uphill capacity of 23,850 skiers per hour. Holiday Valley receives an annual snowfall accumulation of 180 inches and supplements it with artificial snow.

Bristol Mountain Ski Resort is located in Canandaigua, about 100 miles east of Buffalo. The resort’s ski area is between 1,000 feet (300 metres) and 2,150 feet (660 metres) above sea level and covers 160 acres.  Bristol Mountain receives an annual snowfall of 130 inches and supplements it with artificial snow.