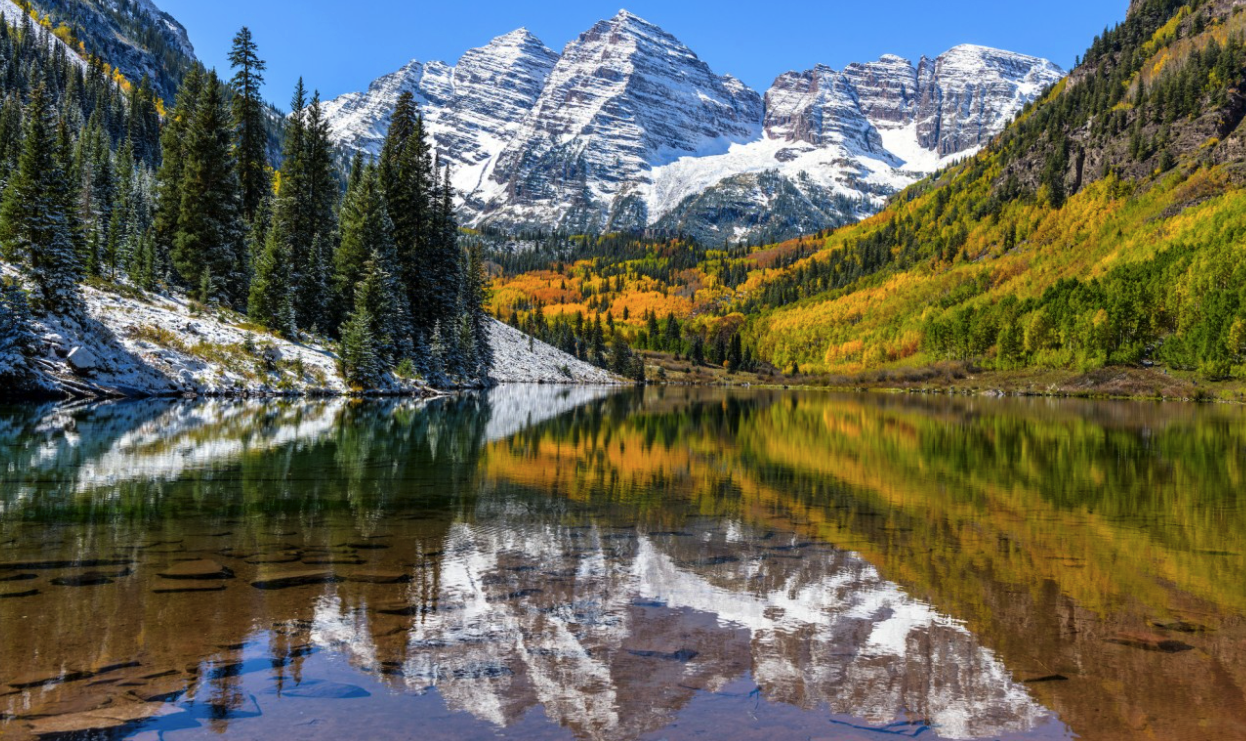 Does it Snow in Colorado?

Colorado is a mountain state located in the Southwestern United States. The state sits at an elevation of 6,800 feet (2,070 metres) and shares borders with seven other states. Colorado covers an area of 269,837 square kilometres and has a population of 5.8 million, making it the 8th largest and 21st most populous state in the U.S. But does it snow in Colorado?

When does it snow in Colorado?

Colorado experiences four distinct seasons, with winter running from December to March. The season is marked by freezing temperatures and heavy snowfall throughout the state. Throughout the year, the average snowfall in the state ranges between 60 inches (1,524 millimetres) to 100 inches (2,540 inches) after

January is the coldest month in Colorado, and temperatures usually stay below the freezing point for most of the month. The average temperatures recorded in the state range from highs of 49 degrees Fahrenheit (9.4 degrees Celsius) to extreme lows of -8 degrees Fahrenheit (-22.2 degrees Celsius). In January, Vail records 35.2 inches (894 millimetres) of snow after 11.8 snowfall days. On the other hand, Denver records 7.0 inches (178 millimetres) of snow after witnessing 5.0 snowfall days.

February is another chilly month in Colorado. Average temperatures in the state range between highs of 50 degrees Fahrenheit (10 degrees Celsius) and lows of 0 degrees Fahrenheit (-17.8 degrees Celsius). On average, Vail sees snow for 11.6 days and records a snow accumulation of 36 inches (914 millimetres). On the other hand, Denver records 5.7 inches (145 millimetres) of snow after 5.3 snowfall days.

March is usually the last month of winter in Colorado, and as the city prepares to usher in spring, a slight increase in average daily temperatures is recorded. Temperatures in the state now range between highs of 60 degrees Fahrenheit (15.6 degrees Celsius) to lows of 4 degrees Fahrenheit (-15.6 degrees Celsius). Snowfall is still heavy on the western parts of the state and the Rocky Mountains while it drastically reduces on the eastern parts of the state.

Where does it snow in Colorado?

Denver is the capital and most populous city in Colorado. The city covers an area of 400 square kilometres and is home to a population of 715,000. Snow falls in Denver from October through to April, and the snow accumulates to a depth of 80.2 inches (2,037 millimetres) after 14.8 snowfall days.

Boulder is a city lying at the foot of the Rocky Mountains, about 40 kilometres northwest of Denver. The city covers an area of 70.9 square kilometres and is home to 108 000 people, making it the 12th most populous city in Colorado. Boulder experiences a temperate climate and records up to 89 inches (2,260 millimetres) of annual snowfall after 21.4 snowfall days.

Vail is a town in Eagle County that was incorporated in 1966. The town covers an area of 12.23 square kilometres and is home to a population of 4,835. Vail witnesses snow for 66.1 snowfall days and record an annual snow accumulation of up to 190 inches (4,826 millimetres).

Telluride Ski Resort has over 2,000 acres of skiable terrain, a vertical drop of 4,425 feet (1,288 metres), and receives an annual snowfall of 300 inches (7,620 millimetres).  The resort has 127 runs that cater to all skiing difficulty levels and has a free gondola that ferries people from the nearby Telluride town to the resort and back.

Breckenridge Ski Resort, located in Summit County, is one of the most frequented ski resorts in the western hemisphere.  The resort has a base elevation of 9,600 feet (2,900 metres) and a summit elevation of 12,988 feet (3,962), giving it one of the highest vertical drops in the area. Breckenridge has 2,908 acres of skiable terrain, 155 runs, and is served by 33 lifts.