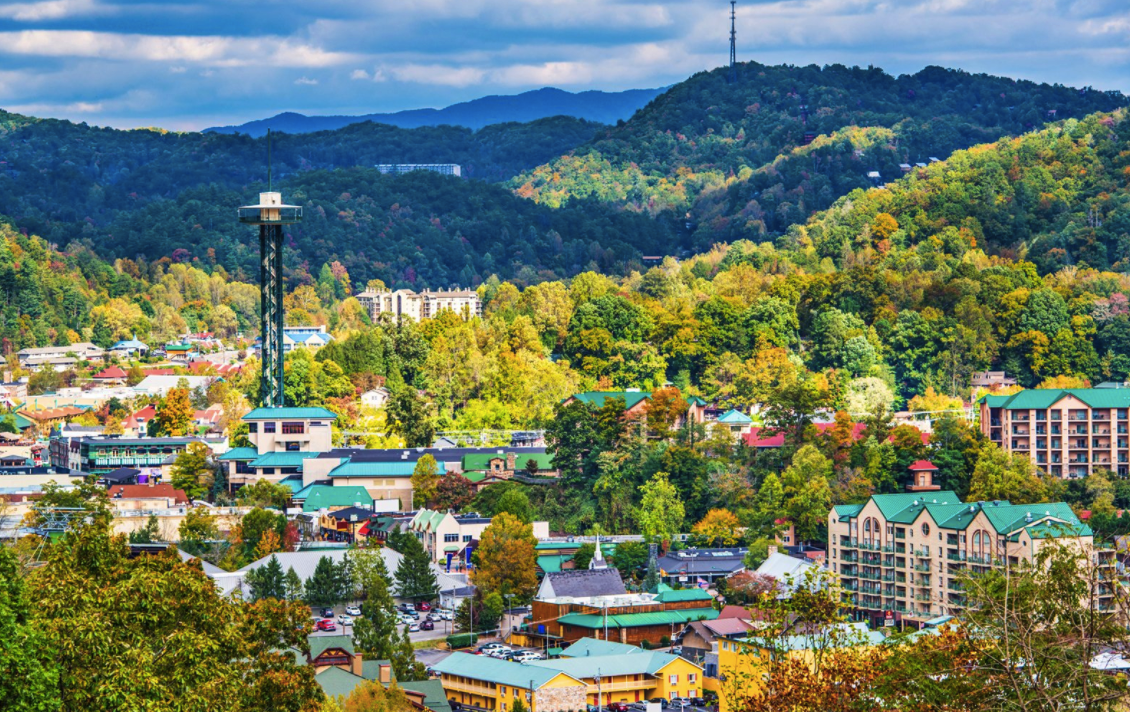 Does it snow in Gatlinburg?

Gatlinburg, originally known as White Oak Flats, is a mountain resort city located 63 kilometres northeast of Knoxville, Tennessee.  The city lies at the foot of the Smoky Mountains at an elevation of 1,289 feet (393 metres) and has a population of 3,860 on its 26.97 square kilometre area. But does it snow in Gatlinburg?

Gatlinburg experiences a humid subtropical climate due to its location in the Smoky Mountains. The city experiences four seasons whereby winters are hot and humid while winters are cool and wet. Precipitation is heavy in the city all year round, with even the driest of months witnessing substantial rainfall. Snow is a common feature in Gatlinburg in winter.

When does it snow in Gatlinburg?

Gatlinburg records its first sighting of snow in October and the last one in April. The winter season, however, starts in December and lasts through to February. In a typical year, Gatlinburg records snowfall for 26.2 days, and the snow usually aggregates up to a depth of 11.42 inches (290 millimetres).

November is the last month of autumn and the first month of snowfall in Gatlinburg. Temperatures in the city are moderately warm and range from highs of 55.6 degrees Fahrenheit (13.1 degrees) to lows of 37.2 degrees Fahrenheit (2.9 degrees Celsius). Rainfall is the most common precipitation during the month, with snow only falling for 2.4 days and accumulating up to a depth of 0.75 inches (19 millimetres).

December marks the start of the winter season in Gatlinburg. Temperatures across the city are in the frosty range and vary from highs of 48.2 degrees Fahrenheit (9 degrees Celsius) to lows of 33.6 degrees Fahrenheit (0.9 degrees Celsius). An average of 2.95 inches (75 millimetres) of snow accumulates in the city after 4.6 snowfall days in December.

The frosty conditions experienced in January intensify their grip on the city. January is, therefore, the coldest month in Gatlinburg, with temperatures in the city ranging from highs of 43.3 degrees Fahrenheit (6.3 degrees Celsius) to lows of 27.5 degrees Fahrenheit (-2.5 degrees Celsius). Snow typically falls on the city for 7.7 snowfall days in January and accumulates to a depth of 2.52 inches (64 millimetres).

February signals the end of the winter season in Gatlinburg. Temperatures in the city are still frosty and range from highs of 48 degrees Fahrenheit (8.9 degrees Celsius) to lows of 31.1 degrees Fahrenheit (-0.5 degrees Celsius).  February is also the snowiest month in Gatlinburg, with the city recording a snow accumulation of 3.35 inches (85 millimetres) after a6.5 snowfall days.

March ushers in the spring season in Gatlinburg. The temperatures across the city are warmer than those recorded during the winter months.  In March, average temperatures in Gatlinburg range from highs of 55.6 degrees Fahrenheit (13.1 degrees Celsius) to lows of 37.8 degrees Fahrenheit (3.2 degrees Celsius). Snow falls on the city for 3.6 days during the month and accumulates up to a depth of 1.42 inches (36 millimetres).

Where does it snow in Gatlinburg?

The city’s central area is located at a low elevation and isn’t as cold, snowy, or wet as the high elevation areas. The annual snowfall recorded in the Gatlinburg valley averages 9 inches (228.6 millimetres).

The tall hills and mountains located in the Smoky Mountains above Gatlinburg receive more snowfall than the city. For instance, Newfound Gap, located just 16 miles from the city, records an annual snowfall of 69 inches (1,753 millimetres).

Ober Gatlinburg Ski Resort and Amusement Park is the only ski area in Gatlinburg and extensive Tennessee in general. The resort opened its doors for the first time in 1975 and has been in operation every year ever since. Ober Gatlinburg has ten trails that cater to all skiing difficulty levels and four lifts for transporting guests.

The ski area also has a summit elevation of 3,300 feet and a vertical drop of 600 feet. On average, the resort receives 35 inches (889 millimetres) and has state-of-the-art snowmaking equipment to supplement the natural snow.