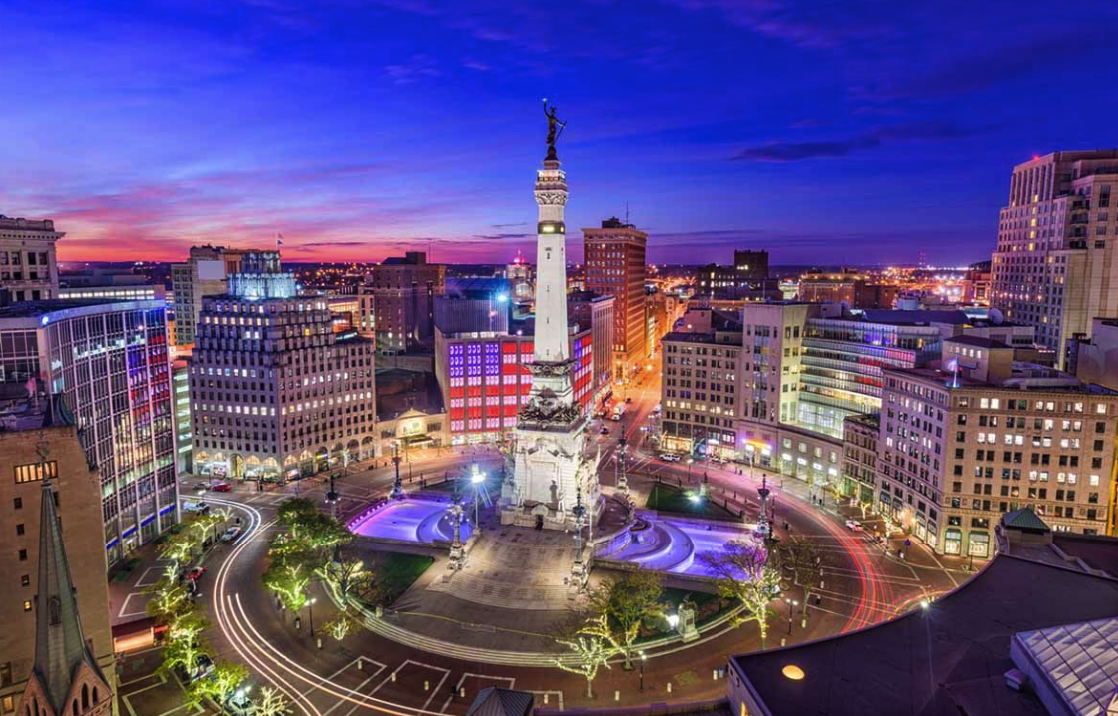 With an area of 94,321 square kilometres and a population of 6.78 million, Indiana ranks as the 38th largest and 17th most populous state in the U.S. Indiana shares borders with the four states of Michigan, Ohio, Kentucky, and Illinois. The highest point in Indiana is the Hoosier Hill at 1,257 feet (383 metres), while the lowest is the confluence of the Ohio and Wabash rivers at 320 feet (97 metres). But does it snow in Indiana?

When does it snow in Indiana?

Snowfall is a common feature in Indiana in winter which lasts from December to February. The state, however, receives its first snowfall in November and the last one in March. As the northwestern part of the state borders Lake Michigan, it experiences the lake snow effect and records higher snowfall than the southern parts. Northwestern Indiana records around 80 inches (200 millimetres) of annual snowfall, while south Indiana records as low as 14 inches (36 millimetres).

November is usually the last month of autumn in Indiana. Temperatures across the state are frosty and range from highs of 48 degrees Fahrenheit (9 degrees Celsius) to lows of 30 degrees Fahrenheit (-1 degree Celsius). During the month, South Bend in northern Indiana records 4.8 inches (122 millimetres) of snowfall after 3.7 snowfall days. On the other hand, Brooksville in southern Indiana records a snow accumulation of 0.2 inches (5 millimetres) after 0.3 snowfall days.

January is another cold winter month in Indiana. It is the coldest month in Indiana, with conditions experienced in December intensifying their grip on the state. In December, daily temperatures in Indiana range from highs of 43 degrees Fahrenheit (6 degrees Celsius) to lows of 15 degrees Fahrenheit (-10 degrees Celsius). It snows in South Bend for 13.1 days, and the snow accumulates up to a depth of 20.6 inches (523 millimetres).

February is the last month of winter in Indiana. Temperatures in the state are similar to those recorded in January and range from highs of 47 degrees Fahrenheit (8 degrees Celsius) to lows of 17 degrees Fahrenheit (-9 degrees Celsius). Snowfall amounts decrease in February and range from 15.0 inches (381 millimetres) in northern Indiana to 4.3 inches (109 millimetres) in southern Indiana.

March is the last month of substantial snowfall in Indiana. As it is the first month of spring, temperatures in the state are slightly higher than those recorded in the previous month of winter. The temperatures in the state vary from highs of 53 degrees Fahrenheit (12 degrees Celsius) to lows of 25 degrees Fahrenheit (-4 degrees Celsius).  In March, snowfall amounts in the state range from 7.1 inches (180 millimetres) in the north to 0.2 inches (5 millimetres) in the south.

Where does it snow in Indiana?

Indianapolis is the state capital of Indiana. The city covers an area of 953 square kilometres and has a population of 0.8 million, making it the most populated city in Indiana. Indianapolis records an annual snow accumulation of 7.87 inches (200 millimetres) after 28.1 snowfall days.

South Bend is a city in St. Joseph County, covering an area of 109.81 square kilometres and having a population of 101,000 people. It is the snowiest city in Indiana and records an annual snow accumulation of 66.6 inches (1,692 millimetres) after 44.9 snowfall days.

Brooksville is a small town located in Franklin County, southern Indiana. The town sits at an elevation of 666 feet (203 metres) and covers an area of 3.75 square kilometres. It snows in Brooksville for 10.1 days annually, and the town records a snow accumulation of 15.5 inches (394 millimetres).

Paoli Peaks ski resort is a resort located in Orange County, southern Indiana. It is open from mid-December to mid-March and offers many snow activities, including skiing, snowboarding, snow blading, and tubing.

Perfect North Slopes is a ski resort located in Lawrenceburg. The resort has 100 acres of skiable terrain, 23 runs that cater to all skiing difficulty levels, and 11 ski lifts. Perfect North Slopes receives a snow accumulation of 23 inches (580 millimetres) during the winter season and supplements it with artificial snow.