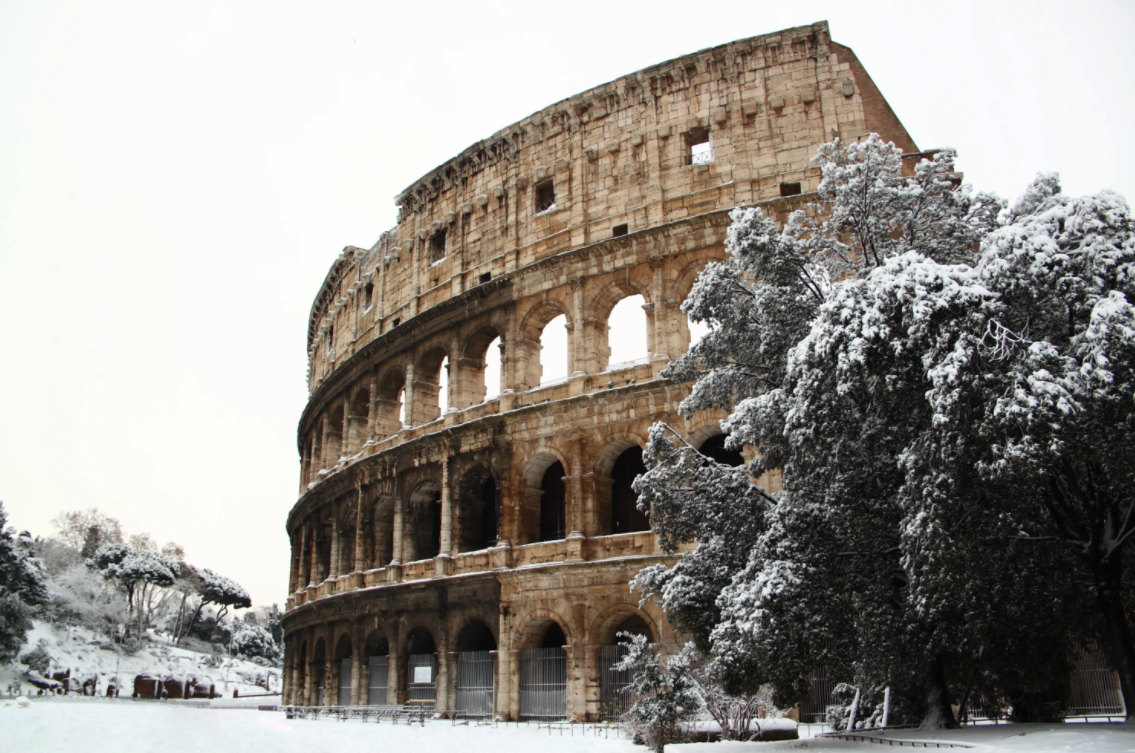 Does It Snow In Italy?

Italy is, without a doubt, one of the best travel destinations in the world. It’s a Mediterranean country in southern Europe known for its mountains. Dry summers and wet winters characterize Italy’s Mediterranean climate.

Yes, it snows in Italy. Nonetheless, snow distribution isn’t equal. Some areas experience mild winters, and others, teeth-chattering cold. In Italy, the winter season lasts from December to February.

When does it snow in Italy?

Since most of Italy’s mainland is mountainous, most people expect a snow-ridden country. This is true in the northern mountains of Italy. However, some regions experience little to no snowfall. A good example is Rome.

Continue reading as we do a detailed month-by-month breakdown of Italy’s winter season.

December is the first of Italy’s “winter months.” As expected, people start experiencing temperature changes. The days become shorter as the cold settles in. December receives an average of about 1.2 cm of snowfall (that’s 0.47 inches).

Northern Italy is the coldest region in December. Northern cities like Milan experience low temperatures of around 3 to 7 degrees Celsius (37 to 45 degrees Fahrenheit). The higher you go, the cooler it becomes. People in the Alpine regions experience harsh cold nights and snow-full days.

Central Italy is also at its coldest in December. Central cities like Rome experience temperatures ranging from 12 to 16 degrees Celsius (54 to 61 degrees Fahrenheit).

Southern Italy isn’t as cold as the other regions. They experience temperatures ranging from 12 to 16 degrees Celsius (54 to 61 degrees Fahrenheit). The cold there is mild in comparison to Northern Italy.

It only gets colder as winter progresses. Have you ever heard of the “Giorni Della Merla?” These are the chilliest days in Italy. They include January 29th, 30th, and 31st.

Early February can be notably cold, especially in northern Italy. Nonetheless, it’s in mid-February that Italy starts to warm up. In February, central Italy is slightly warmer than the north, with even less snowfall. The southern regions are the coziest, and most visitors go there as they escape the chill in the north and central regions.

In February, the people experience slightly higher average temperatures ranging from 4 to 13 degrees Celsius (38.3 to 55.4 degrees Fahrenheit). February receives an average of about 1.2 cm of snowfall (that’s 0.43 inches).

Where does it snow in Italy?

Some cities receive relatively more snowfall than others. In fact, some Italian cities rarely receive snowfall. In such cities, snowfall becomes a spectacle that sparks various festivals.

Did you know that Milan is Italy’s biggest mainland city? On top of that, it’s among the most fashionable cities in Europe. It’s home to some of the biggest clothing brands in the world.

Despite being cold, temperatures rarely fall below 1℃. When it snows, Milan receives around seven days of snow per year. The winter of 2005 – 2006 was the last time Milan was heavily snow-ridden. The city received almost 32 inches of snow.

There is more to Rome than pasta. Yes, pasta and gelato are delicious. In addition to that, Rome is also rich in culture, art, and history.

Venice is a must-visit destination. It’s an eye-pleasing city with interesting people and cultures. For me, the most spectacular is the Carnival of Vernice. At this festival, people wear masks to conceal their identity.

Despite its location in northern Italy, snowfall in Venice is significantly small-scale compared to snowfall in the Italian Alps. Snowfall is unpredictable in Venice. During the day, temperatures range from 6 to 8 degrees Celsius (43 to 46 degrees Fahrenheit). Snowfall in Venice happens twice a year. However, it never accumulates.

Florence is an artistic city in northern Italy. Did you know that Florence is the birthplace of Leonardo Da Vinci? Opera, as a genre, was also invented in Florence.

Yes, it snows in Florence. However, the precipitation is insignificant. Therefore, snow-accumulating winters only happen once every few years. Do you wish to experience snowfall in Florence? I advise you to visit in late January or early February.

Alright, snow lovers. You’ll be happy to know that Italy has some of the best ski resorts in the world. Why? Because of the Italian Alps. There is something for everyone. Both beginners and experienced skiers alike.

Cortina d’Ampezzo, also known as “The Queen of Dolomites,” is perhaps the best ski resort in Italy. The James Bond 007 Movie “For Your Eyes Only” even featured the ski resort. Tofana is its highest point, and Pomedes is the largest. For beginners, I’d advise you to visit Cortina.

Val Gardena is the smaller than Cortina d’Ampezzo. Therefore, it’s a good alternative for visitors during the high-peak ski season. Since it’s not crowded, it offers a more intimate skiing experience. Nonetheless, it also has the longest ski slope in South Tyrol.

The resort was once “hidden” and only limited to the wealthy and well-known winter athletes. However, the ski resort came to life after the 2006 Winter Olympics. It has around 163 skiing trails—40 are beginner trails, 30 are for experts, and the rest are intermediate.