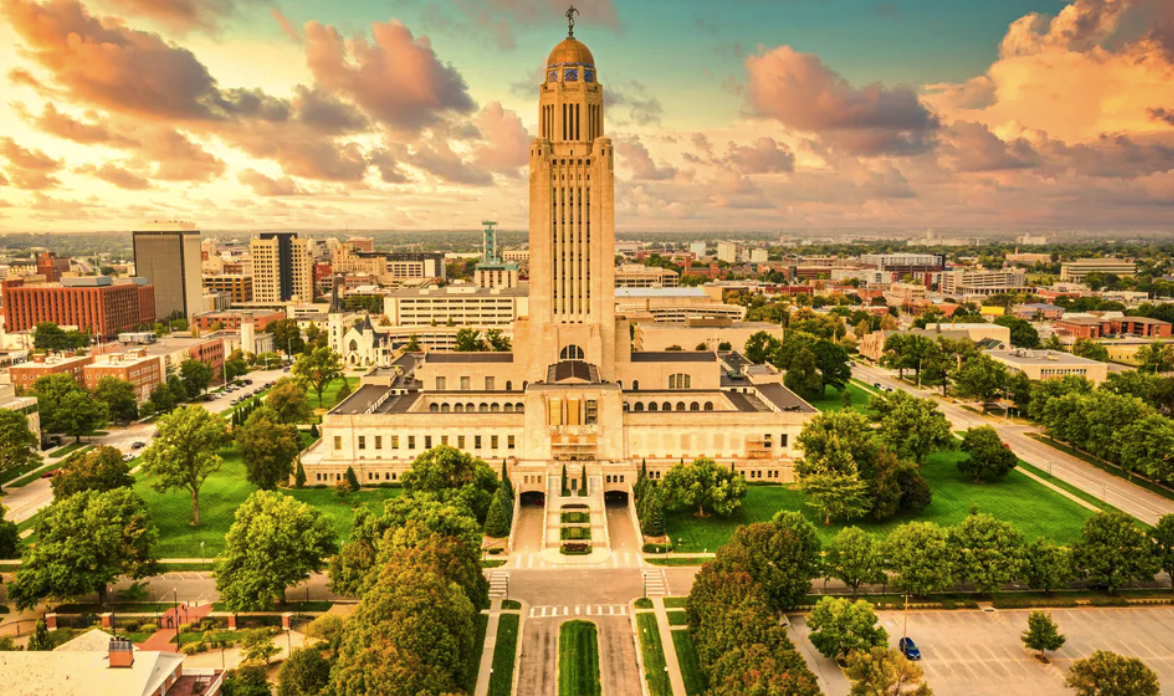 Nebraska is a triply landlocked state located in the Midwest region of the United States.  It is ranked as the 16th largest and 37th most populous state in the U.S. and has a population of 1.9 million on its 200,356 square kilometre landmass. The highest point in Nebraska is the Panorama Point, at an elevation of 5,424 feet (1,654 metres), while the lowest point is the Missouri River at 850 feet (256 metres). But does it snow in Nebraska?

Nebraska has two main climate zones, with most of the eastern part experiencing a humid subtropical climate, while the western panhandle area near Colorado experiences a semi-arid climate. Nonetheless, all parts of the state witness extreme temperature variations and experience hot summers and cold, snowy winters. And as the state lies in the Tornado Valley, it is struck by thunderstorms in winter and spring.

When does it snow in Nebraska?

Snow begins to fall as early as November and ceases around April. However, the peak of the winter weather runs from December through to March, when temperatures often dip below the freezing point.

Temperatures rise slightly in February but are nowhere close to comfortable levels. During the month, Nebraska records average temperatures ranging from highs of 45 degrees Fahrenheit (7.2 degrees Celsius) to lows of 13 degrees Fahrenheit (-10.6 degrees Celsius). The state receives ample snowfall and records about 5.2 inches (132.08 millimetres) of snow after 2.9 snowfall days.

March usually marks the end of heightened winter, even though snowfall can occur in April. Temperatures rise considerably and now range from highs of 50.5 degrees Fahrenheit (10.3 degrees Celsius) to lows of 25.5 degrees Fahrenheit (-3.6 degrees Celsius). Snow falls in the city for an average of 2.7 days and accumulates up to a depth of 5.5 inches (139.7 millimetres).

Where does it snow in Nebraska?

The panhandle region near the Colorado border receives a relatively more significant snowfall than the eastern part. However, the snowfall variation is relatively small, and about 30 inches (762 millimetres) of snow accumulates across the state in winter.

Lincoln is the capital and second-most populous city in Nebraska. The city sits at an elevation of 1176 feet (358 meters) and has a population of 289,000 living on its 249.11 square kilometre landmass. Winter temperatures in the city fluctuate between highs of 41.25 degrees Fahrenheit (5.14 degrees Celsius) and lows of 19 degrees Fahrenheit (-7.2 degrees Celsius). Lincoln witnesses snowfall for 18.3 days during the winter season and records a snow accumulation of 25.9 inches (657.9 millimetres).

Omaha is the largest and most populous city in Nebraska. The town sits at an elevation of 1,090 feet (332 meters) and has a population of 486,000 on its 374.48 square kilometre landmass. Winter temperatures in the city vary between highs of 40.5 degrees Fahrenheit (4.7 degrees Celsius) and lows of 21 degrees Fahrenheit (-6.1 degrees Celsius). On average, Omaha records an annual snowfall of 27 inches (685.8 millimetres) after 21.7 snowfall days.

Grand Island is a city established by 35 German settlers in July 1857. The city has grown over the years and now covers 77.41 square kilometres and is home to 52,267 people. The city experiences chilly winters and records temperatures ranging from highs of 40.9 degrees Fahrenheit (4.9 degrees Celsius) to lows of 19.2 degrees Fahrenheit (-7.1 degrees Celsius). Grand Island receives ample snowfall during winter and records a snow accumulation of 29 inches (736.6 millimetres) after17.8 snowfall days.

Mount Crescent Ski Area is located on Iowa Bluffs, about 15 miles northeast of Omaha. The resort has been in operation since 1961 and has a summit elevation of 1,295 feet and a vertical drop of 300 feet. It also has 50 acres of skiable terrain and ten trails that cater to all skiing difficulty levels.

Gretna Resort is a ski club located in Gretna city. The club holds social events at discounted prices while skiers enjoy 20 acres of skiable terrain that caters to all skiing difficulty levels. Gretna Resort has a 200 feet (60.96 meters) vertical drop.

Prairie Hills Golf and Ski Resort is located in Pleasanton and has 15 acres of skiable terrain and a 120-foot vertical drop. The Prairie ski area also offers night skiing with proper lighting along the trails and has its longest run measuring 1300 feet (396.24 meters).