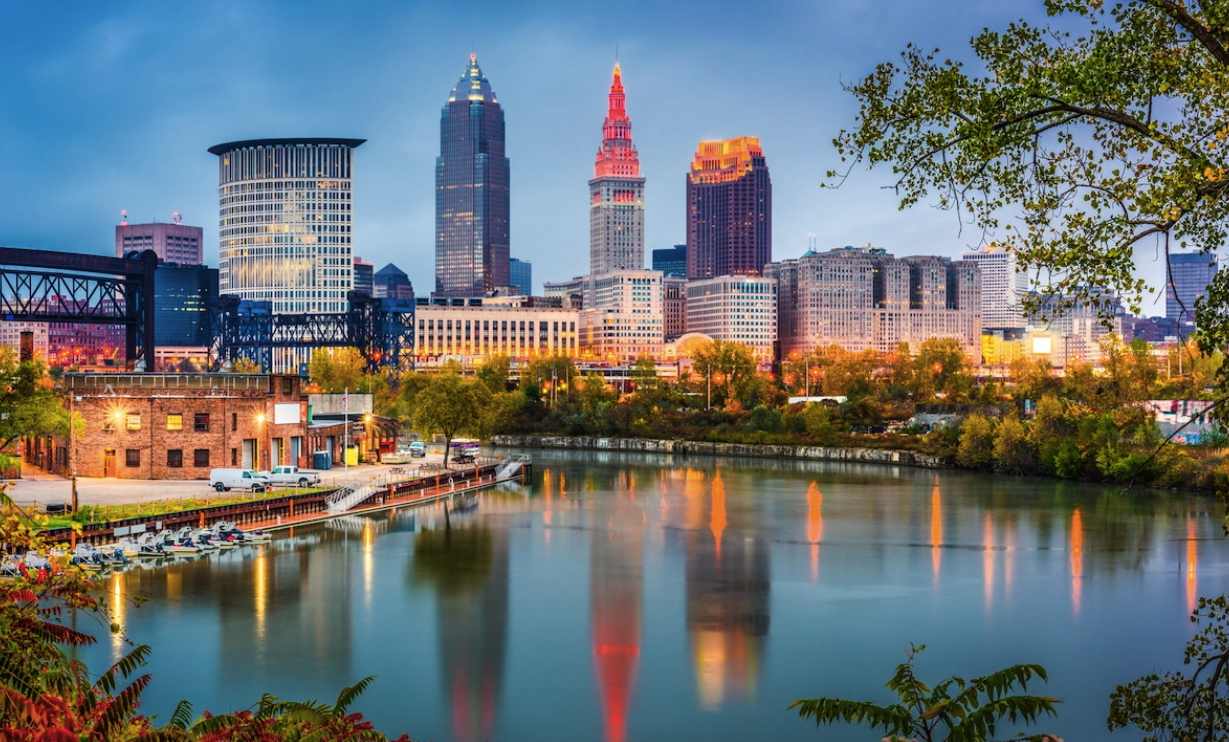 Does it Snow in Ohio?

Ohio, also known as The Buckeye State, is located in the Midwest region of the United States. It is the 7th most populous state in the U.S., with over 11.8 million people. Ohio sits on a 116,096 square kilometers landmass and has its highest elevation as Campbell Hill at 1,549 feet (472 meters). The lowest point in the state is the Ohio River at the Indiana border at just 455 feet (129 meters) above sea level. So, does it snow in Ohio?

When does it snow in Ohio?

Freezing temperatures, accompanied by snow flurries, may set in as early as November and run through to April. However, significant snowfall is recorded from December to March.

December is a cold month in Ohio, with temperatures often falling below the freezing mark. Average temperatures range from highs of 41 degrees Fahrenheit (5 degrees Celsius) to lows of 26.6 degrees Fahrenheit (-3 degrees Celsius). Average snowfall in the northern parts of the state is 9 inches (228.6 millimeters), while the southern regions record about 3 inches (76.2 millimeters) of snow during the month.

February is still chilly, but there is a slight increase in temperatures from those experienced in January. Average temperatures in the state range from highs of 41 degrees Fahrenheit (5 degrees Celsius) to lows of 24.8 degrees Fahrenheit (-4 degrees Celsius). Snowfall is heavier in the north and averages about 8.7 inches (221 millimeters), while about 4.5 inches (114.3 millimeters) of snowfall is recorded in the south.

March marks the end of winter in Ohio. As the state prepares to usher in the spring season, average daily temperatures increase. During the month, temperatures average highs of 51.8 degrees Fahrenheit (11 degrees Celsius) and lows of 28.4 degrees Fahrenheit (-2 degrees Celsius). The state records an average snowfall of 6.6 inches (167.54 millimeters) in its northern area and a slightly lower figure of 2.2 inches (55.88 millimeters) in the southern regions.

Where does it snow in Ohio?

Columbus is the capital city of Ohio and the most populous city in the state, with close to a million inhabitants. The city sits at an elevation of 902 feet (275 meters) and experiences light snowfall. Columbus records temperatures ranging from highs of 42.8 degrees Fahrenheit (6 degrees Celsius) to lows of 26.6 degrees Fahrenheit (-3 degrees Celsius) during winter. Columbus witnesses 30.4 snowfall days throughout the year and records an accumulation of up to 27.5 inches (698.5 millimeters) of snow.

Cleveland is located on the southern shore of Lake Erie, 100 kilometers west of Ohio’s border with Pennsylvania. The city has cold winters and receives the most snowfall in Ohio. During winter, temperatures average highs of 39.2 degrees Fahrenheit (4 degrees Celsius) and lows of 25.2 degrees Fahrenheit (-3.7 degrees Celsius). Cleveland records 46.9 snowfall days annually, and the snow aggregates to depths of 68.1 inches (1,730 millimeters).

Toledo is a major port city in the Midwest U.S. The city has a population of around 300,000 and ranks as the 4th and 73rd most populous city in Ohio and the United States, respectively. Toledo experiences cold winters marked by considerable snowfall. Temperatures vary from highs of 40 degrees Fahrenheit (4.4 degrees Celsius) to lows of 24.6 degrees Fahrenheit (-4.1 degrees Celsius) in the city during winter. Toledo records an accumulation of 37.7 inches (957.5 millimeters) of snow throughout winter after 33.7 snowfall days.

Skiing Snow Trails ski resort has 5.3 km of slope available for skiing and snowboarding. The resort’s winter sports area is located between elevations of 370 meters and 440 meters. Skiing Snow Trails caters to all skiing difficulty levels and has its trails categorized into 28% beginner, 53% intermediate, and 19% advanced.

Does it Snow in Ohio?

Does it Snow in Oregon?

Does it Snow in Albuquerque?

Does it Snow in Nashville?

Does it Snow in Oklahoma?

Does it Snow in South Carolina?

Does it Snow in Las Vegas?

Does it Snow in North Carolina?

Does it Snow in Madrid?

Does it Snow in Arizona?
We use cookies on our website to give you the most relevant experience by remembering your preferences and repeat visits. By clicking “Accept”, you consent to the use of ALL the cookies.
Cookie settingsACCEPT
Manage consent