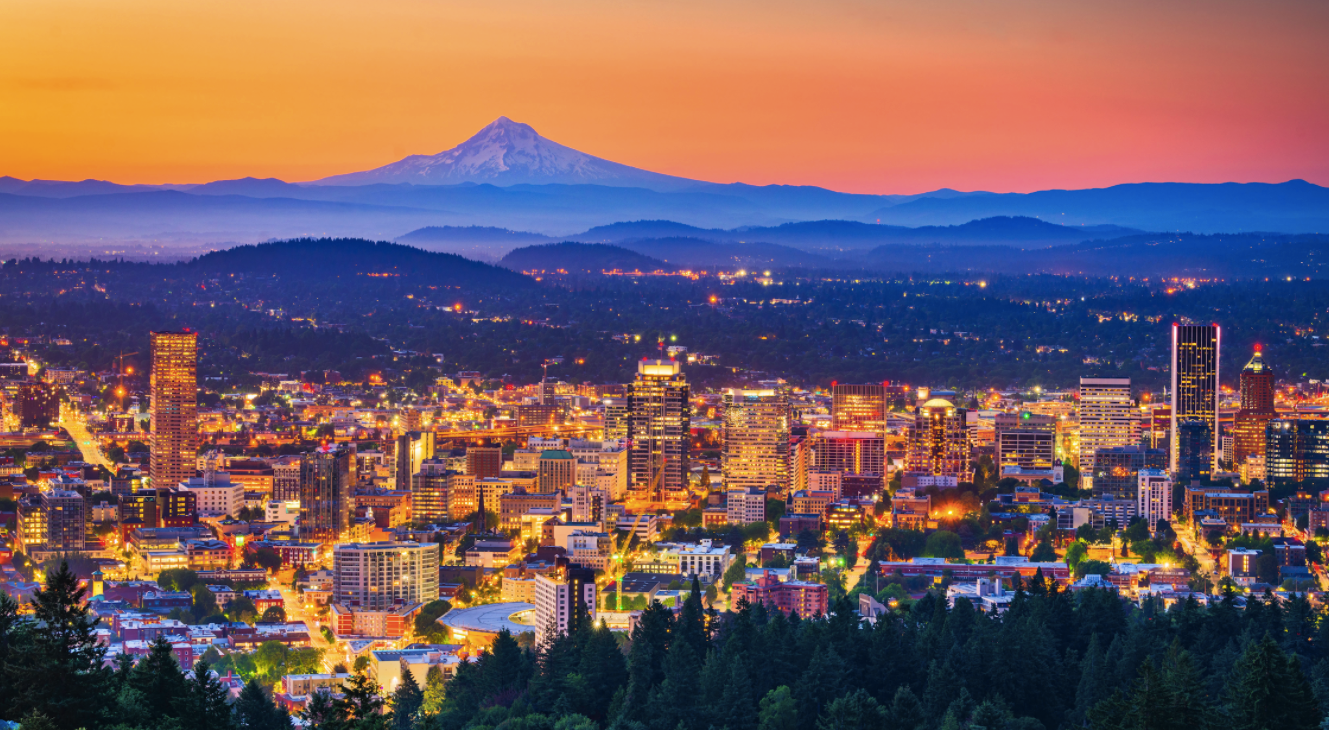 Does it Snow in Oregon?

From deserts and semi-arid shrublands to dense evergreen forests, volcanic mountains, and vast water bodies, Oregon is blessed with a geographically diverse landscape that promises the thrill of adventure that most travel enthusiasts will kill for. This state, which doubles as the home to the deepest lake in the United States, Crater Lake, sits on extensive 250,000-kilometer square land and has 4 million. Oregon’s highest point is Mount Hood at 11,249 feet (3428.8 meters), while its lowest is in the Pacific Ocean at sea level. But does it snow in Oregon?

With its geographical diversity, it is no surprise that different parts of Oregon experience different climatic conditions.  For instance, the coast region exhibits an oceanic climate, eastern Oregon a desert-like climate, and the mountainous areas of the north a steppe climate that changes to subarctic conditions at higher altitudes.  The northern and eastern parts of Oregon have clearly defined seasons where winters are cold and snowy.  Oregon, therefore, sees snow from November through April. Snow is predominant in the mountain ranges of the Cascade Mountains, with a massive accumulation ranging between 150 inches (3810 millimeters) and 550 inches (13970 millimeters) of snow being recorded annually.

When Does It Snow in Oregon?

November marks the end of the fall season in Oregon. As the state ushers in the winter season, temperatures range between highs of 57 degrees Fahrenheit (13.9 degrees Celsius) and lows of 27 degrees Fahrenheit (-2.8 degrees Celsius). Heavy snowfall is recorded in the mountains, with the Cascade Mountains recording an average of 15 inches (381 millimeters) to 20 inches (508 millimeters) of snow.

Oregon experiences average low temperatures ranging from lows of 11 degrees Fahrenheit (-11.7 degrees Celsius) to highs of 42 degrees Fahrenheit (5.6 degrees Celsius) in December. The most negligible snowfall is recorded in the coastal region, with Seaside recording no snowfall during this period. The amount of snowfall pelting the state increases as you move inland and reaches its peak at the Cascade mountains, where the snow accumulates up to depths of 91.1 inches (2,314 millimeters).

January is the coldest month in Oregon, with temperatures dropping as low as 10 degrees Fahrenheit (-12.2 degrees Celsius) in some parts of the state. On the coast, Astoria records 0.4 inches (10 millimeters) of snow over 0.6 snowfall days. At the same time, in the Cascade Mountains, Crater Lake Park sees 15.9 snowfall days and an accumulation of 87.4 inches (2,220 millimeters) of snow.

February sees chilly temperatures and occasional snowstorms in the high-altitude areas of Oregon. Temperatures range from highs of 55 degrees Fahrenheit (12.8 degrees Celsius) during the day and drop to freezing lows of 25 degrees Fahrenheit (-3.9 degrees Celsius) at night. Snowfall is consistent in the mountains, with up to 75 inches (1,905 millimeters) of snow recorded at Crater Lake Park.

March is the last month of winter in most parts of Oregon. Temperatures range from highs of 59 degrees Fahrenheit (15 degrees Celsius) to lows of 37 degrees Fahrenheit (3 degrees Celsius) in the state’s central region. The snow in most areas starts to thaw as the state prepares to transition into spring but persists in the mountains until late April. As coastal towns record zero snowfall, high in the mountains, Crater Lake records 15.6 snowfall days and an accumulation of 73.2 inches (1,859 millimeters) of snow.

Where does it Snow in Oregon?

Salem is the second-largest city in Oregon and serves as the state’s capital. The city covers an area of 127.51 square kilometers and has about 400,000 people residing within its boundaries. Salem records its first instance of snow in November and the last sighting in March. February is the snowiest month in Salem and posts a cumulative 1.18 inches (30 millimeters) of snow. The city experiences 3.4 snowfall days and records up to 6.2 inches (157 millimeters) of snow throughout the year.

Portland is the largest city and most populous city in Oregon, having a population of 1.9 million in its metropolitan area. Portland experiences a temperate climate where winters are overcast and precipitous. Temperatures in winter range from lows of 35.8 degrees Fahrenheit (2.1 degrees Celsius) to highs of 48.7 degrees Fahrenheit (9.3 degrees Celsius). March is the snowiest month in Portland as it snows for an average of 1.6 snowfall days, and the snow accumulates to depths of 1.5 inches (38 millimeters).

Crater Lake, the deepest lake in the US, is located in Crater Lake National Park in south-central Oregon. The lake is situated between 7,000 feet (2,100 meters) and 8,000 feet (2,400 meters) above sea level and measures 8 by 9.7 kilometers of squares. Snow falls in Crater Lake from September through July and accumulates up to 482.5 inches (12255.4 millimeters) of snow. December is the coldest month in Crater Lake, with average temperatures hovering around 18.1 degrees Fahrenheit (-7.7 degrees Celsius).  Consequently, this month also records the most snowfall, with  91.1 inches (2313.9 millimeters) of snow being booked into the weatherman’s records.

Oregon has an active skiing scene with more than 12 ski areas that cater to a large, diverse number of winter sports enthusiasts that flock to the state every winter season. The ski areas range from luxurious resorts to local ski areas.

Here are three ski resorts worth checking out.

Mount Bachelor is a ski resort located in Oregon that boasts 100 kilometers of slope and 25 kilometers of ski routes for skiing and snowboarding. The resort caters to all skiing difficulty levels and is equipped with 11 ski lifts.

Mount Hood Meadows ski resort boasts 90 kilometers of a skiable slope, a feature that makes it popular among skiing and snowboarding enthusiasts. The resort’s winter sports area is situated between 1,378 and 2,225 meters above sea level and is served by  11 ski lifts.

Hoodoo ski resort is located 150 kilometers northwest of Salem on the Cascade Range of Oregon. It was established in 1938 as a private venture, and it boasts 3.26 square kilometers of skiable terrain and a vertical of 315 meters. The resort receives 360 inches (9,100 millimeters) of snowfall during winter and is open from mid-December to late March. During this period, the resort offers night skiing on Fridays and Saturdays.