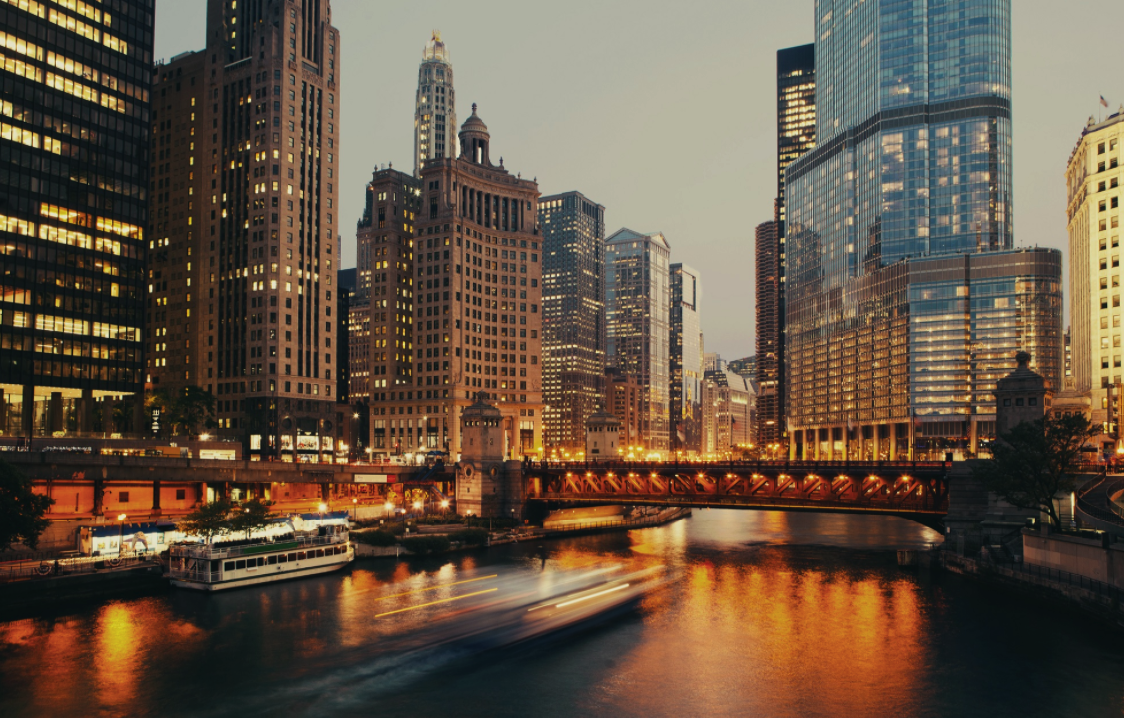 Does it Snow in Chicago?

With a population of over 2.7 million on its 607.43 square kilometre landmass, Chicago is ranked as the third-most populous city in the U.S. Chicago is a diverse city famous for its architectural landmarks such as the Willis Tower that draw millions of visitors every year. The highest point in Chicago is Blue Island at 672 feet (205 meters), while the lowest point is Lake Michigan at 578 feet (176 meters). But does it snow in Chicago?

Chicago experiences a humid continental climate with well-developed seasons. Summers in the city are hot and humid, while winters are cold and snowy. The city records milder temperatures at night and in winters than the surrounding areas due to the urban heat island effect. The city’s proximity to Lake Michigan also means Chicago experiences cooler summers and warmer, snowier winters thanks to the lakes effect.

When does it snow in Chicago?

Snowfall is a constant feature in Chicago during winter, which starts in December and lasts through February. The city, however, usually reports its first instance of snowfall in November and the last as late as May. Chicago records a snow accumulation of 13.9 inches (353 millimetres) throughout the year after 40.9 snowfall days.

November is the last month of autumn and the first month of snowfall in Chicago. Despite it not being winter yet, temperatures in the city are frosty and fluctuate between highs of 49.6 degrees Fahrenheit (9.8 degrees Celsius) and lows of 35.2 degrees Fahrenheit (1.8 degrees Celsius). It snows in the city for an average of 4 snowfall days, and the snow accumulates up to a depth of 1.42 inches (36 millimetres).

December marks the start of the winter season in Chicago. Temperatures in the city plummet from those recorded in November and occasionally fall below freezing point. Throughout the month, average temperatures in the city range from highs of 37.7 degrees Fahrenheit (3.2 degrees Celsius) to lows of 25.3 degrees Fahrenheit ( -3.7 degrees Celsius). Snow falls in the city for an average of 7.5 days and accumulates up to a depth of 2.52 inches (64 millimetres).

January is the coldest and snowiest month in Chicago. Temperatures stay below the zero mark and range between highs of 29.7 degrees Fahrenheit (-1.3 degrees Celsius) to lows of 19.5 degrees Fahrenheit (-6.9 degrees Celsius). Snow falls in the city for an average of eight snowfall days and accumulates up to a depth of 10.8 inches (274.32 millimetres).

Despite being the last month of winter in Chicago, the cold weather continues its onslaught in the city. There is a slight rise in temperatures, but the conditions in the city are still freezing. In February, average temperatures in Chicago range from highs of 36.8 degrees Fahrenheit (2.7 degrees Celsius) to lows of 22.9 degrees Fahrenheit ( -5.1 degrees Celsius). On average, Chicago records a snow accumulation of 9.1 inches (231.14 millimetres) in February after about six snowfall days.

March, being the first month of spring in Chicago, brings reprieve from the bitter winter. Temperatures are forbearing and range between highs of 47.9 degrees Fahrenheit (8.8 degrees Celsius) to lows of 32 degrees Fahrenheit (0 degrees Celsius). Throughout the month, Chicago records a snow accumulation of 5.6 inches (142.24 millimetres) after an average of 4 snowfall days.

Where does it snow in Chicago?

Snow falls equally across the city of Chicago. However, the Chicago Midway Airport receives the most snowfall, recording about 37.1 inches (942.34 millimetres) of snow annually. On the other hand, the Botanical Gardens gets the least snowfall and records an annual snowfall of 33.4 inches (848.36 millimetres).

Chicago skiing activities might not compare to that of eastern or western U.S. However, it is still frequented by tourists and winter sports enthusiasts during the winter season.

Chestnut Mountain Resort is located on Chestnut Mountain, about a two-hour drive from Chicago. The resort is perched on a tall ridge towering over the Mississippi and has a 475-foot vertical drop and 29 trails for skiing and snowboarding.

Alpine Valley Ski Resort is located in the Sugar Creek Valley, southern Wisconsin, about 90 miles from Chicago. It has 21 runs, three terrain parks for skiers and snowboarders and a large enclosed beginner area. Schooling for skiing and snowboarding is also available for children above the age of five.

This ski resort is located in southwestern Michigan, about a two-hour drive from Chicago. The resort has been in operation for over 40 years and has 11 ski slopes, five lifts, and a 225-foot vertical drop.