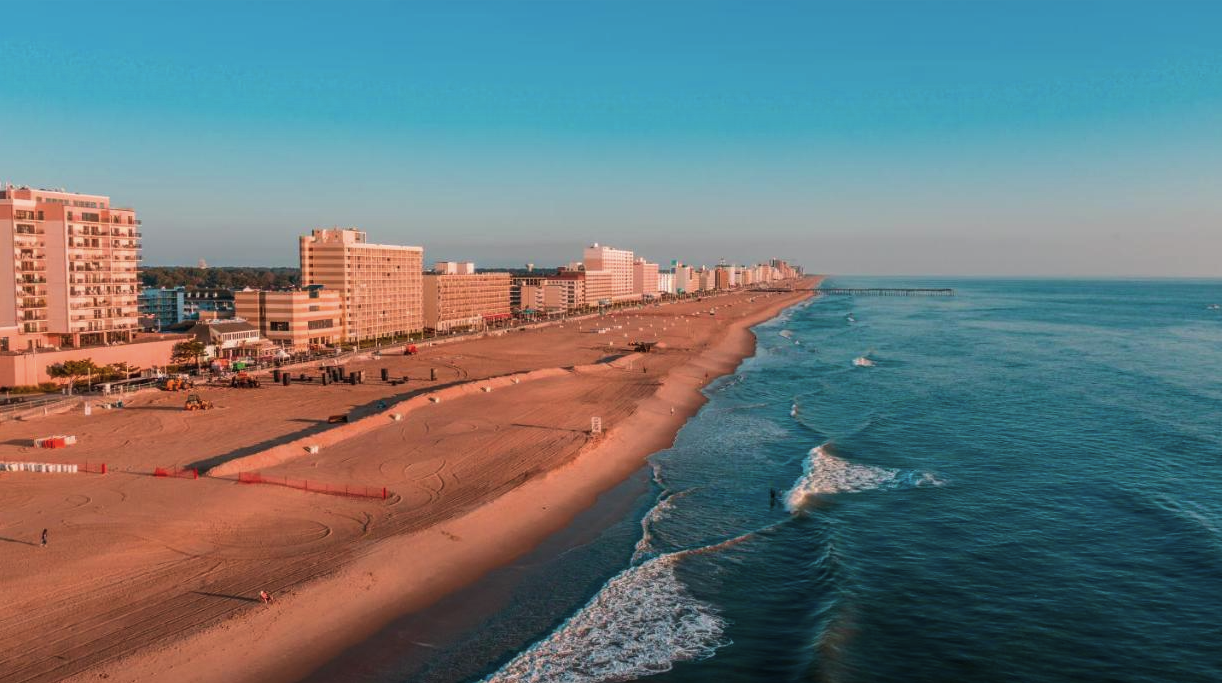 Does it Snow in Virginia Beach?

Virginia Beach, also known as the Resort City, is situated on the southeastern coast of Virginia. The city gets its moniker from the fact that it has several miles of beaches that are flocked by tourists every year. Virginia Beach sits at an elevation of 10 feet (3 meters) and has its lowest point as the Atlantic Ocean. The city is inhabited by 460,000 people, making it the most populous city in Virginia and the 43rd-most populous city in the United States.  But does it snow in Virginia Beach?

Virginia Beach lies in a humid subtropical climate characterized by hot, humid summers and cool, snowy winters. Throughout the year, Virginia Beach records a snow cover of 0.47 inches (12 millimetres) after a total of 3.8 snowfall days.

When does it snow in Virginia Beach?

Virginia Beach experiences relatively mild winters compared to other regions in the state of Virginia. The winter season in the city begins in December and runs through to March. During this period, the average temperatures in Virginia Beach fluctuate between highs of 54.7 degrees Fahrenheit (12.6 degrees Celsius) and lows of 36.9 degrees Fahrenheit (2.7 degrees Celsius).

January is another frosty month in Virginia Beach, but temperatures rarely fall below the zero mark. Average temperatures in the city range between highs of 0.7 degrees Fahrenheit (10.4 degrees Celsius) and lows of 33.6 degrees Fahrenheit (0.9 degrees Celsius). But as these temperatures are still too high, heavy snowfall cannot be experienced in Virginia Beach like in the other parts of Virginia. The city records about 0.47 inches (12 millimetres) of snow throughout the month after 3.8 snowfall days.

Winter conditions in February are relatively unchanged from the previous month, except for the slight increase in temperature. Daily average temperatures in the city vary between highs of 53.4 degrees Fahrenheit (11.9 degrees Celsius) and lows of 35.1 degrees Fahrenheit (1.7 degrees Celsius). Snowfall is light, and the city accumulates up to 0.28 inches (7 millimetres) of snow after 1.4 snowfall days.

March is the last month of winter and snowfall in Virginia Beach. Temperatures rise significantly from previous months and now range from highs of 60.1 degrees Fahrenheit (15.6 degrees Celsius) to lows of 41.3 degrees Fahrenheit (5.2 degrees Celsius). It rarely snows in Virginia Beach in March, with only one in every three years seeing snowfall in recent years.

Where does it snow in Virginia Beach?

Virginia Beach is not a Beacon for winter activities owing to its somewhat warm climate. However, the state of Virginia has a lot of skiing resorts near the city you could visit if so inclined.

Wintergreen Resort is located in Central Virginia’s Blue Ridge Mountains, about 217 miles from Virginia Beach. The resort has 129 acres of skiable terrain, five ski lifts, and 26 slopes that cater to all skiing difficulty levels. Of the resort’s 26 slopes, 14 are lit and can facilitate night skiing.

Massanutten Ski Resort boasts of the biggest vertical drop in Virginia, Pennsylvania, and Maryland states. The resort is 212.6 miles from Virginia Beach and has 1,100 feet of vertical drop.  It also has 14 lighted trails that are open to skiers, snowboarders and skateboarders.

Bryce skiing resort is 270 miles from Virginia Beach, in the northern part of Virginia’s Shenandoah Valley. The resort has 25 acres of skiable terrain, a summit elevation of 1,750 feet (533 metres) and a vertical drop of 500 feet (152 metres). It also has eight runs that cater to the needs of all skiing difficulty levels and is equipped with two ski lifts for transporting guests.